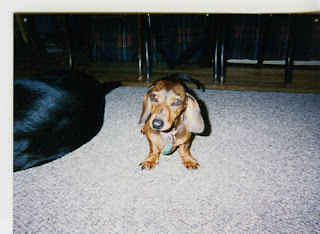 Unfortunately, my dog story is not completely told. But I've been mulling over the next part for quite some time because to write about it will open old wounds.

When I was going through my divorce ten years ago, I drove to work, so I could get home quicker and try to deal with the stresses that a spouse newly elected to the state legislature and gone all the time to Olympia creates. I parked in a cheap lot across the freeway from the office, and as I was parking there nearly every day, I became friends of a sort with the lot attendant, John. One cold February day he had a miniature dachshund puppy with him in the attendant's shack and boy was it cute! I exclaimed over the puppy, petted it and learned that his name was Alpha. Nothing more was said or seen until the late summer of '99, probably 6 months later, which, by then the ex had decided he liked the glamour of sleeping around that came with his elected position and elected to abandon the marriage. The divorce would be final in two months' time. I was parking the car and saw John the parking attendant. I remembered that bitterly cold February day and that warm ball of fur and asked him how Alpha was. He responded that he had to find a home for Alpha because he was going through a divorce and his new apartment didn't allow pets. Now just a few days earlier, my youngest son (age 9) had told me as I was putting him to sleep that although he loved Max, our black lab, that sometimes he wanted a little dog just to hold in his lap, like a miniature dachshund. It may have been the catalyst to my remembering to ask about Alpha that morning. But the symmetry and sadness was so close, that I spontaneously said to John, "I'll adopt Alpha!."

And so it was agreed. That evening I loaded the kids up in the old '83 VW bus that I was driving at the time and we drove over to John's apartment complex to pick up Alpha. When we got to the door we were met with two miniature dachshunds--John had cleverly not told me that Alpha came with Heidi, a much older miniature tri-color dachshund. And there I was, on the horns of a dilemma. Of course, I said yes with just a wee bit of hesitation first, so we were off back to home with not one, but two dogs to round out our all too typical family.

Now Alpha was a dog unlike any other dog I had ever met. He really looked like Jimmy Durante, his nose was soo long and so crooked. But just like Durante, it made him look cute. This was a dog who from the instant he woke up in the morning to when he dropped to sleep at night was on the go 100 mph all the time. He was with us for about a week, when he started humping every leg in sight. Male, female, dog, human. Even a ladder. He had not been neutered, which obviously was the source of his incredible horny dog problem, so once that was accomplished, he settled into other interesting but not as alarming behaviors.

Max, my steady, mild mannered black lab was delighted to have two little barkers around stirring things up. They were the yin to Max's yang, and during the days, they all slept on the same mat together, two little brown balls curled tightly next to their big black friend. They taught Max to bark loudly when unknown visitors came to the door. Which meant anyone but the immediate family. When I took the three dogs to the park (it felt like I needed a parade license to walk this many dogs), so I could throw Max's ball for him (because he is/was obsessed with retrieving), Alpha watched intently for a couple of sessions, and then had to do the just the same thing. So he got his own Alpha sized ball and would retrieve same as Max. Alpha the retriever dachshund.We also discovered that Alpha loved to grab on to a rope with a knot on the bottom of it and hold on with 'jawlettes' of death, so that you could swimg him around and around and around. It was all a big game.

Alpha had more eccentricities beyond that. For one, he loved to chew on the bottom of pants legs. I remember having one fellow to dinner when I was starting to date again, and Alpha did a number on his pants cuffs while we were eating our meal. And of course since our legs were under the table, the guy never picked up on it at the time, because Alpha could have the most delicate touch. I'm sure it was rather a shock for the guy to finish dessert, stand up, look down and discover that one pant leg was slightly higher than the other. That guy never came back again.Alpha loved all three of my kids, but he, in particular, bonded with my youngest son, the one who had wanted a little dog who would sit in his lap. They became inseparable friends, Alpha sleeping under the covers with him at night. It was a wonderful 4 years for them.

This is where the story veers off the track and goes bad. In the summer of 2003, the boys left to spend a week on Orcas Island with their dad and his girlfriend. My daughter stayed briefly behind with me for the weekend because she had to work before leaving for Orcas, but the boys were gone.Early on that Saturday morning, I had gone out to run errands, and when I drove back up to the house after being gone for less than an hour, I was surprised to see Heidi out in the the front yard, because the house was fenced in the back and that's where the dogs had been placed before I left. Heidi was agitated and not acting like her usual, calm self. I called for Alpha and got no response. My daughter went downstairs and out the back yard and gave a great cry. Alpha's rabies tag had become tangled on the seat of one of the outdoor chairs in the back yard. It was a wire lattice work chair and somehow the tag had become wedged into the space between the metal wires. So when Alpha went to jump off the chair, his collar had caught, the chair held, and it had strangled him. One of those freak, unpredictable accidents.

And there was nothing that I could have done to prevent it--other than never putting his rabies tag on him, or throwing those damn chairs away, or not running Saturday errands, or any other infinite number of 'should haves' 'could haves' that I cursed myself for. So, after freeing Alpha from the chair and crying copious quantities of tears, I had to call my boys and tell my youngest, via long distance, that his dog, the light of his life, had died. That was without a doubt the very hardest thing I have ever had to do. If I could have donated a limb or an organ and brought Alpha back to life, I would have. It was like Alpha had died twice. No three times, because I waited til the kids got home from their vacation, so we could have a proper burial service and closure, in our back yard. I cannot tell you how very, very sad this time was for me and for my children, especially the youngest.

I still remember and mourn Alpha each and every week. He was a doughty lad who had the heart of a lion. He loved each of us as deeply as his little doggy heart could, without reservation. There was no dog like him before or since in my life. And these words are a pale approximation of the joy and the sorrow that he brought to all of us. I hope wherever he is that he has lots of folks to twirl him around and lots of pants legs to chew on.
Posted by moe99 at 6:34 AM No comments: