A Season of Giving

This year we did things a bit differently at my house.  The kids received one gift plus fun things in their stockings.  It worked out really well for me because my wrapping chores on Christmas eve were substantially reduced.  I received wonderful gifts from them.  But what I'd like to share with you are the engravings that my youngest son made for one of his art classes.  They, to me, are absolutely wonderful. 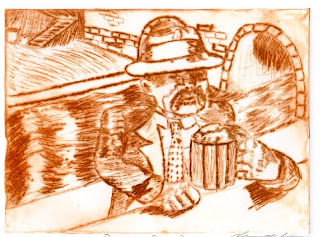 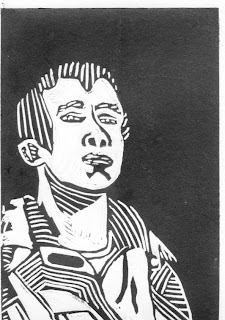 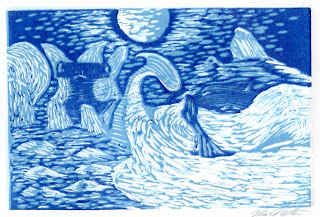 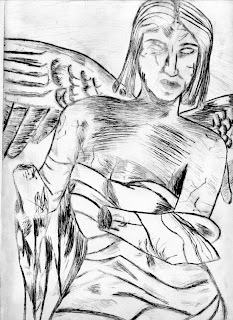 Nike
I hope your celebrations were festive and rewarding and that the New Year brings joy and contentment.﻿
Posted by moe99 at 9:38 AM 2 comments:

Whistling past the graveyard

The food disposal gave up the ghost last night.
Posted by moe99 at 8:31 AM 4 comments:

The basement is drying out.  Slowly in parts, but it has not flooded again, thank goodness.  We've even had sunny weather several days.  Which is unusual for the upper left hand corner of the map in December.

Unfortunately Sundays seem to have become synonymous for disaster in my small world.  Today I returned home after church to find Scooter, my 7-year old dachshund, in considerable distress.  He was crying and  quivering.  I took him outside to see if his bladder stones were back but urination was not the problem.  He could not shake his head without yelping in pain.  So I called my regular vet, who was booked for the day, and then bundled him into the car up to the Emergency vet on 15th NE and NE 148th.  2 hours later (several more urgent cases came in at the same time), it appears that Scooter may have a herniated disk in his neck.  When the vet palpated his back, he was fine but when she moved his head down and to each side, he cried out loudly.  So tomorrow after chemo, or Tuesday, he will be going to his regular vet to be sedated for xrays to hopefully conclusively determine whether there is disk herniation and the extent of it.   He's on three pain medications/muscle relaxants and complete bed rest for 4 weeks.  Which means he must stay confined in a kennel most of the time, and be carried outdoors to do his business.   No walks or tearing around the house with Truffle.  We're trying to get the inflamed area to quiet down and heal itself without surgery.  He is also banned from wearing a neck collar for the rest of his life, just like Max.

It's very difficult to confine him to the kennel which has been brought in from the garage, cleaned up and placed in the dining room, because he thinks he's being punished and so he whines.  Loudly and constantly.  Occasionally Truffle joins him in the pity party from outside his prison, while Max paces back and forth in concern.  I may have to resort to wearing earplugs in the house.  How festive.

Fingers and toes crossed that we can make it through this latest test of our holiday spirit.

Here are the dogs this summer in a happier time, courtesy of my son's camera which has a video component.  It is mainly Truffle, but Scooter is a constant presence and Max shows up at the end.

When it rains it pours

We've had a very grey and soggy winter thus far in Seattle.  Yesterday and today it poured, even by Seattle standards.  In fact, according to KING5, Sea Tac recorded a new daily maximum of 2.20" of rain today.  35th Avenue NE, the main north/south thoroughfare by my residence, was closed this morning because water from the creek, a half mile north of me had overrun the road.

What this meant for me, was that my youngest son texted me at church to inform me that the basement had flooded.  Up the hill next door to my house,  are two Hong-Kong size houses that went up 3 or 4 years ago.  This, plus the unusual deluge of rain this weekend, may be the genesis of the small geyser that was bubbling on the floor in the central part of my basement this morning.  My youngest son went on the roof to clean out the gutters just in case, and I trenched around two sides of the house to try to relieve some of the water pressure.  Fun stuff to do in your church dress and dress boots....Then friend Anne and friend Spot brought towels, an extra mop dry vac, and some fans and we went to work inside.  Several hours and no rain later, the geyser has become a trickle and the towels (3 loads of them washed and dried thus far) seem to be soaking it up well.

It looks like I may need some serious basement drainage work done.  Like Scarlet O'Hara, I will think about that tomorrow.  Or maybe even later as I have chemo tomorrow.

Or, perhaps I could modify my oldest son's engineering school robot project to soak up the water instead:

This is how I choose to remember her. 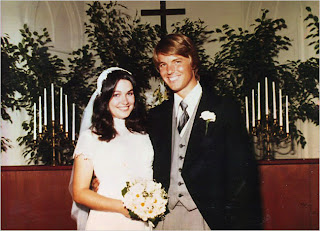 She loved deeply, and because she was the more intelligent of the couple, she knew where the real  priorities in life were.  She wrote a moving eulogy for Tony Snowe, George W. Bush's press secretary.  I recommend that all of you read it because it says a great deal for us and about her generosity of spirit in these polarized and grossly politicized times.  I am profoundly saddened tonight.
Posted by moe99 at 10:48 PM 1 comment: